It’s almost Oscar time! But even if silver screen sirens might be a thing of the past, the allure of Glamour hasn’t faded at all. And it inspired me to indulge my wildest technicolour dreams, for the sheer fun of going all out Oscar!

As attendees and nominees are currently scrambling to put together their glamour outfits, I’ve been working on this makeup story, because I have some serious Oscar envy. Not to mention, an infatuation with the first colour movies of the 50s and 60s. Colour was a novel thing, and directors, set and costume designers used the most stunning palettes, making a lot of them a treat to see, even if the plot-line was sort of weak (my fave is Gentlemen Prefer Blondes). Then came the 60s, and movies shifted to a golden tone. All the actresses were dyeing their hair blonde and sporting healthy suntanned skin with peachy lips.

If you’re a fan of Audrey Hepburn (like I am) and you’ve studied her look,  you’ve probably noticed that her trademark brows are pretty much drawn on—like totally Kim K style! Yes, that’s right, those brows were around back then, it just shows that glam is not going anywhere.

If I sort of …take a moment… to think about it, it kinda makes sense. Makeup was actually invented for movies in the first place. Max Factor, the prototypical Hollywood makeup artist, invented the first foundation: the Pancake because the first colour films would distort skin tones. Of course, starstruck women started to copy their favourite movie stars and well…  life imitates art and then art imitates life. We’ve just been reinventing that makeup wheel ever since, even if it’s for our Instagram accounts.

I just pulled out all the tricks in my makeup bag on Ana (well no baking)! I just loooove that 60s combination of golden hair and golden skin, the original nude look. I kept the skin that way for all the pictures as my tribute to sun-kissed golden Bond Girls and brave Angels (Victoria’s and Charlies’) love them all, and let’s not forget those California Girls, too…  I used my secret recipe, which is a combination of contouring products layered precisely to create dimension: Anastasia Beverly Hills and Kat Von D contour Palettes, over Giorgio Armani Liquid Summer (my go-to temporary fake tan), creating a better-than-a-real-tan complexion. On eyebrows: Anastasia Beverly Hills products. In photographs it’s really easy to get highlighting, I just avoided powdering, but if you want a similar effect I would suggest M.A.C. cream base in Pearl or Dior Glow Maximizing Primer.

Of course, Glamour needs the proper lighting, and Cesar, my main squeeze photographer, did an amazing job. I also had great help from amazing hairstylist Louise Olsen, who made Ana’s hair just wavy enough so that it looked perfectly modern. 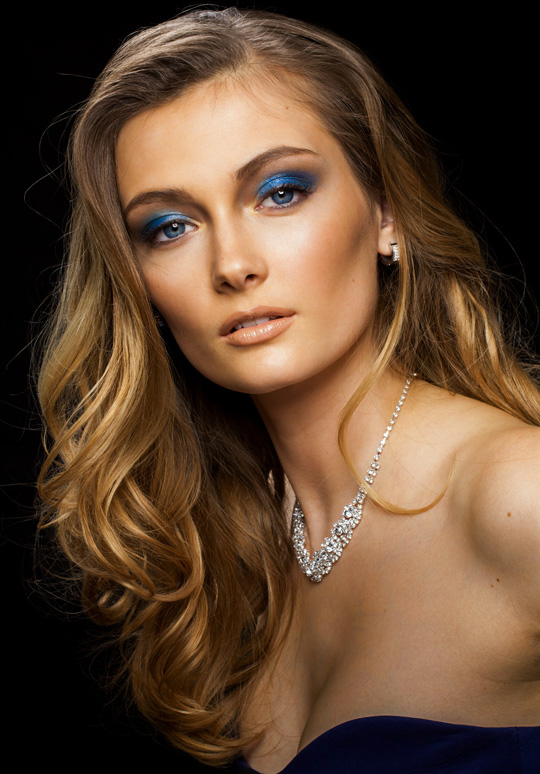 Look 1 It was all about emphasizing Ana’s amazing blue eyes (that’s their real colour!).
I used NARS dual intensity eyeshadow in Cressida, new this spring. Then I used the Kat Von D Eye Contour Palettte to create a crease and define the shape of the eye, and I lined them with Stila’s Halfmoon (cool shimmering grey) waterproof eyeliner. On lips, my fave: MAC Siss and Cork lip liner. Dress by Valerie Dumaine.

Look 2 For a dramatic eye, I used a golden body paint base on the eyelid and I used Dior Mono cream eyeshadows from a few collections back, to sculpt a sort of sixties/seventies dramatic eye with lashings of Dior Iconic Overcurl, and lined with a Make Up For Ever eyeliner in shimmering black. Lips are the same. Dress by Leinad Beaudet. 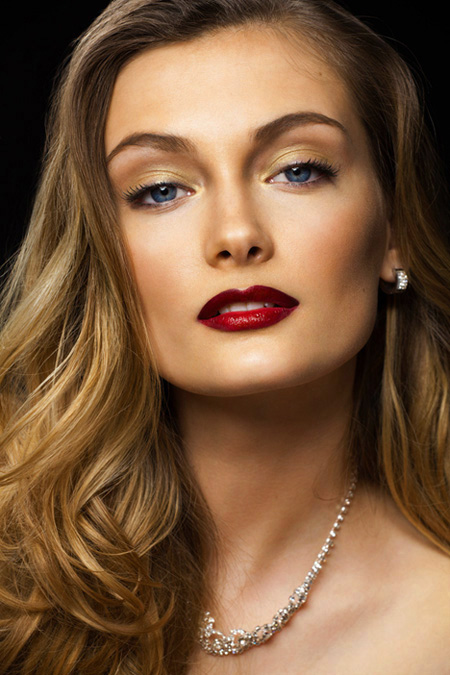 Look 3 Finally for the last look, I went for a classic 50s minimal look but done in a modern way (the golden skin breaks the rules already). I used MAC Night Moth lip pencil to create that elongated and round upper lip of the era (I confess it was wayyyy beyond her natural lip line, but all of this is a make believe shoot) and blended it with Dior Addict Fluid Stick in 975 for a more dramatic, and sexier pout. On the eyes, I used NARS eyeshadows; Himalia dual intensity for shimmer and the Portobello duo to shape.

The necklace and earrings are costume jewelry, with rhinestones—not diamonds, because Hollywood always likes to make believe, and so do I 😉