Lea Valente, went through cancer twice, and she still is shining bright, living life to the fullest, and enjoying every minute. This special guest post will also be also featured in Dress To Kill magazine, this summer.

It’s a very special post for me! Some of you may know that I was beauty editor and co-founder of a young Canadian fashion magazine called Dress To Kill. It’s now been almost two years since I’ve been flying on my own. I was very happy when my former partner in crime, Sylvain Blais, who is now creative director at the magazine, asked me to do this guest feature (portrait and interview) in the magazine.

Before I work on any post, I always ask myself how do I visually create the story. And more importantly, in this case, how do you present someone who went through something so difficult, in a strong and positive way? Well the answer was simple: you go bold and you take risks!

Before the shoot, I didn’t know much about Lea, but her sparkling and enthusiastic voice was guiding me. And because I usually improvise the makeup around the clothes, I was looking for fun and exciting clothes that would be reflecting Lea’s positives vibes.

Shootings are a sort of a gamble, you bring safer and more crazy options. In the magazine there was only space for one picture, but for the blog I wanted something funky all the way! I also realized that Lea didn’t look like she had cancer. I’m sure most people who meet her, probably have no idea either! She is so vibrant and happy, so full of life, that unless she tells you, you might think that the shaved head is a personal style choice! That’s how we worked the shoot! How do you get the most out of such a bold statement…  and not because it was forced on her, but because she chose to rock it! Below, is the first look, the safest. The magazine chose a picture from the plum mouth look. 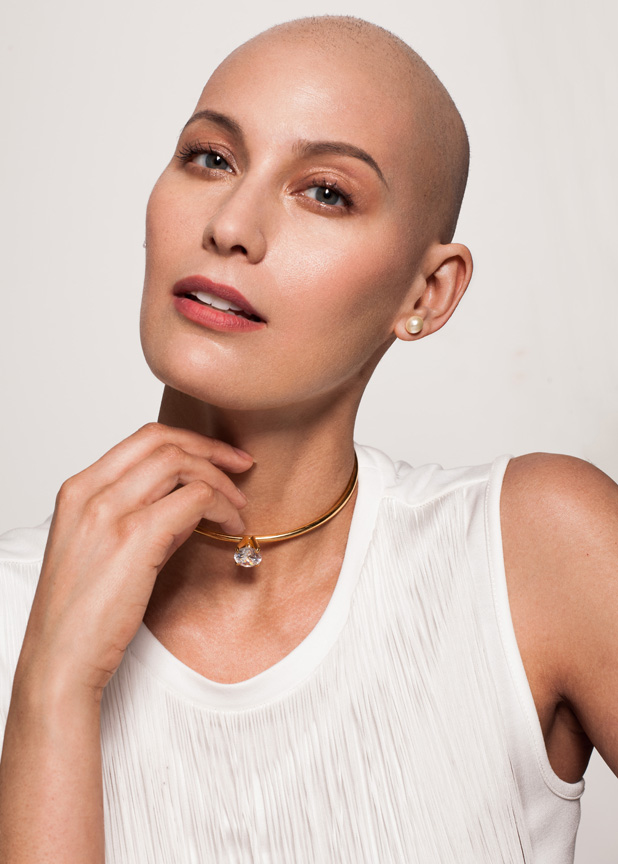 Lea, you’ve been modelling all your adult life. You also have a great personal life: you’ve been with your husband for 15 years, you’ve had a child together, and you’ve been working with him on creative projects. It’s impossible, by any stretch, to imagine cancer looming in. How did you realize something was not right with your health?
I had found a lump under my collar bone, in September 2013. It wasn’t painful, but it wasn’t normal. I knew in one second it was wrong. When you have swelling in the lymph nodes it could be any cancer, and it can also mean it’s in the final stages. I was very scared! But then I learned it was Hodgkin, and because it’s very curable I could breathe a little. 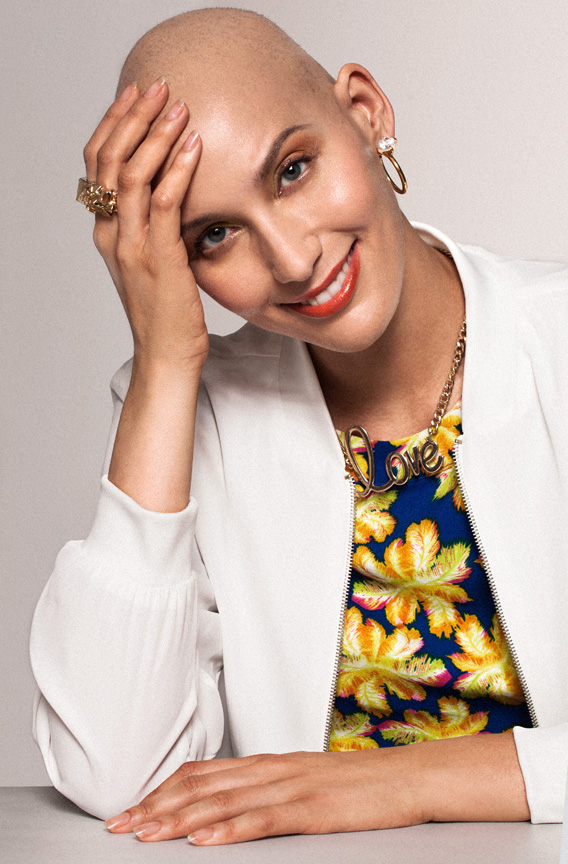 How did you react to the diagnosis?
I was taking such good care of myself, that the diagnosis was so overwhelming. I had to accept what was happening, without finding reasons, that was really the hardest part of this cancer, just accepting it was.

Chemo means loosing your hair. How did you deal with it?
It was very difficult losing my hair. But finding out I had cancer paled in comparison. I decided to take charge, and shave my head before it all fell out. That made me feel in control and strong.

There is a big connection between looking good and feeling good. How did you manage to keep feeling good when your image in the mirror changed?
I think society puts so much emphasis on hair, but it’s another kind of beauty that I have embraced. It’s still hard because people will look at you the minute you are different. It does suck! On the other hand, a lot of the cancer coping methods are about masking what’s happening. But I do understand that a lot of women need to do that. But after something like this: it’s just life, and everything becomes so beautiful. When you look at other people going through cancer, their true being, their true essence comes out. Everything comes out, in a way, and you see everything, but that is what is beautiful. And being this vulnerable, people become so open: it’s beautiful to me. 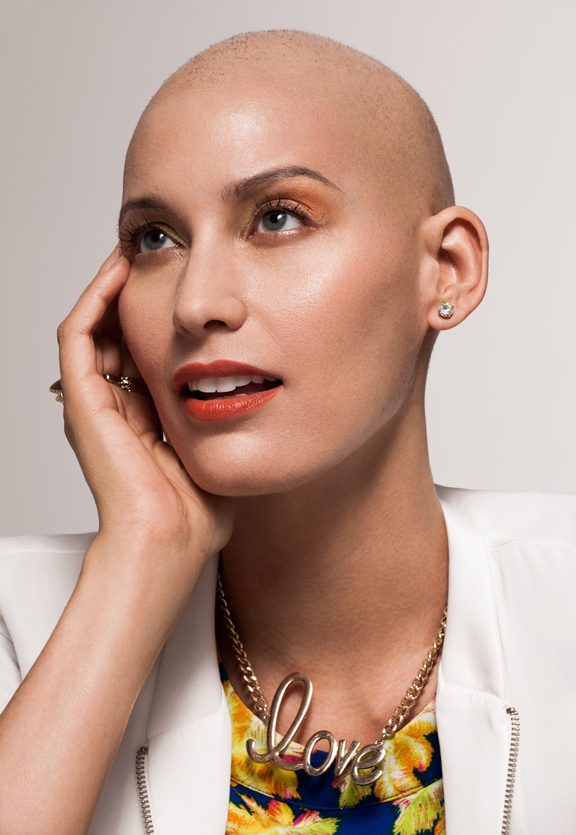 Did loosing the hair make you feel less sexy?
I didn’t feel very sexy the first time! Not because I had a shaved head, but because I was so sick during chemo, and just when I would start to feel good again, I would have to go in for another treatment. But the second time around it wasn’t as issue at all. On Facebook, I get a lot of women messaging me saying things like: “I was so scared to get cancer, and seeing you cope so well with it makes me feel so much better”. And with social media, people are creating these images of themselves that are so uniform, especially right now, I feel like it’s refreshing to see a bald head! It’s really important for me to share this.

How did you cope going through the treatments?
Meditation, that was my real key: amazing transformation! And also tapping, I took a course at my local Cancer Center, it’s a method where you’re specifically addressing what is bothering you. It’s a process, so you can’t just start tapping anywhere. I also did a lot of fundraisers for the Montreal Jewish General Hospital for Ovarian Cancer. It was my control over the disease, to help women with ovarian cancer, partly because my mother had it, and also it’s one of the deadliest forms of cancer.

How did you deal with the cancer coming back a second time ?
The second time was so different. We all believed I was cured. It took a long time for me to accept what was happening. I had started working a lot again as a model, and starting to feel like myself. But I felt a lot stronger that time, I felt like I had more control over my emotions, thoughts and feelings. I had to shave my head right before the stem cell transplant and it was like I was getting ready to go into the battlefield.

Working with you on this shoot, I stared with a simple beauty and style look, but as the shoot was evolving, I felt I could go really cool and edgy. It felt like the right thing to do with you! Did you become bolder with your style choices, with this new look?
I always liked the bold pieces, the cool clothes—that was always my style. But now, it looks even better! With my longer hair, I had a more classically pretty look, which my clients liked, but then it was harder to bring out my true personality. I’ve grown to like the contrast of having a bald head, which is not conventionally beautiful, with a long flowy flower dresses. I also like the androgynous side of it! 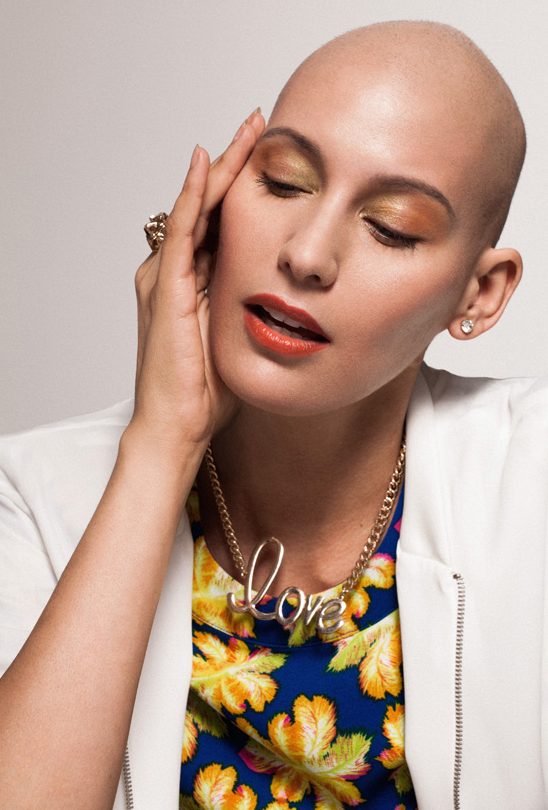 Are you going to grow out your hair, now that you’re finished with the treatment?
The first time I was eager to get back to “normal”. This time… I don’t know… I really don’t. I’m a different person now, and I don’t know what will happen tomorrow. This is now.

When you go through something intense like this, it changes you! How did it change you?
I learned a lot about myself through both times. It’s almost like the path had opened up even more when I relapsed. I had to learn how to cope and how to manage my fears and emotions. I also just did things that made me happy like spending time with my loved ones, eating my favourite foods or watching my favourite movies. You can’t come out of something like that the same. I’ve changed, I’ve grown in so many ways. I value time so much now. I live in the moment and enjoy things even more, if that’s possible! I believe I have been like this my whole life, but everything is just magnified; your strength, your joy, your love, your happiness. I’ve become magnified as a person. What I tried to eliminate was fear, it can take over all those beautiful things. It took a lot to work through my fear, but it was the acceptance of the cancer and fear, that helped me to get over it.