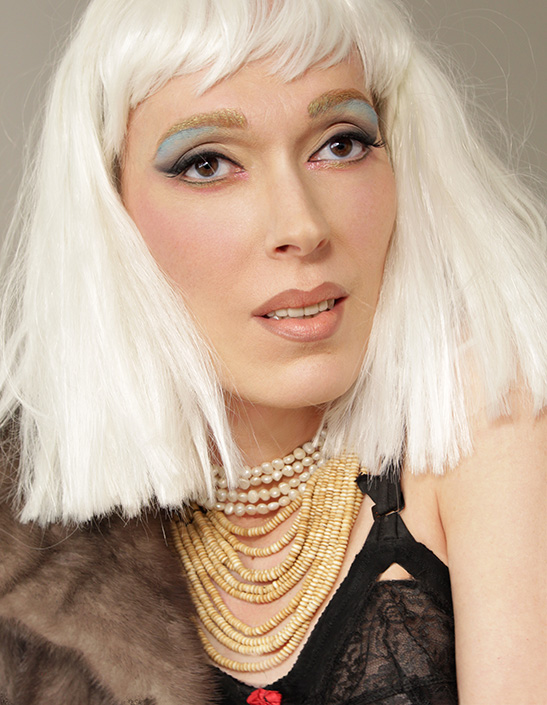 To celebrate 6 months of self-portraits, and to make it to Xmas, I’m working on my Showgirls! A tribute to two of my favourite inspirations: Fashion Magazines and Music Hall entertainers. If you want to find out more about what I learned. Self-portraits are edited to remove my acne scars. All clothes are vintage and were bought from a local thrift organization.

I’ve been slowly unravelling my self-image, through the mechanics of The Male Gaze. Yes, my desire to be pretty for the camera. I’ve come to realize that it isn’t for men, or for women, but for my own enjoyement. Narcisism, but not in the unhealthy stare-at-your-own-image, but with that part of my brain that says: “this is me? “.

It’s often happened, while applying makeup on another woman. That moment, when I comment on my sitters beauty, the reaction is almost always flustered, or bemused, and it’s sometimes followed with a critical note: “yes but…”. I’ve come to realize, we are the last ones to be able to see our own beauty, or our appeal.

THE RULES OF PRESENTATION
Skip back to a few years ago, when a friend introduced me to the concepts of Art Historian, John Berger, on the perception of art. Through his BBC documentary, I also discovered the idea of The Male Gaze, a concept coined by Laura Mulvey, a Film Theorist. Think of it as a sort of cookbook on the representation of women. If you’re not already familiar with these concepts, I would recommend doing some research.

Let’s be honest, I’ve always known on a deeper level, that the very nature of being photographed, is to be made into an object, or at least, a two-dimensional character. And there are certain clichés that work really well. The idea that you can, with one photograph, acurately and fully represent the wholeness of someone’s being, is ludicrous. Even a movie couldn’t fully depict a person.

ME, MYSELF & MY HEROES
So why am I taking photographs of myself? First of all, I don’t put myself up directly in front of the lens. What I want to do, is to explore the images of women that I have assimilated. We are all currently exploring ideas of what it means “to be”. You are living your concept of existence, you are embodying it. Parts of it are about what you present to the world, other parts of it are your values. Most of it, you’ve gleaned through other people’s explorations, and parts have been integrations, or even your own creations.

These pictures are about what I’ve collected in the shadows of my unconscious; snapshots of womanhood through pictures and movies. To help me fully assimilate them, I give substance to these projections. Perhaps being an artist, I’ve drunk too much of the Kool-Aid. I’ve fallen under the spell of inspirational portrayals of women.

Through the narrow scope of fashion magazine portraiture, which is all about playing out a character for the camera. It also happens to be the perfect excuse to wear fancy clothes, as well as performative makeup and hair. I’ve come to call these women my Vogue Showgirls, blurring the line between real and fantastical. These ideals are quite impossible for me to dissociate today. I see the world through the lens of a fashion image!

CINDY SHERMAN SAYS
I have to acknowledge here, incredible pioneer, Cindy Sherman on her work. She started way back in the late seventies. Using film, she created her own setups. I realize even more how her determination to do the work of subverting and challenging the mechanics of glamour– and finding it’s flaws and it’s fears –is instrumental for all of us walking down this path.

IS THERE A FEMALE GAZE?
Perhaps the question now should be, what is The Female Gaze? Is there such a thing? Are the new crop of self-portrait artists finding new ideas, or replaying The Male Gaze? I personally have been pushing myself to break out of the pretty face, altough it’s still haunts me. I do everything I can to subvert it. Now that I’m older, wiser, I can unravel the mystique of what I saw. On some level, it’s giving me a wonderful sense of catharsis, of closure, of getting my power back.

Let’s bring Harry Styles into the frame. Perhaps it would be great to examine how you perceived this person, who’s identity is: man/cis-gender. I think it was really exciting, because it showed that there indeed is a Female Gaze, culturally, at least. As more and more people take the camera to photograph themselves, will the language of self-presentation evolve or will it still revolve around what painting, movies, and photographs have created?