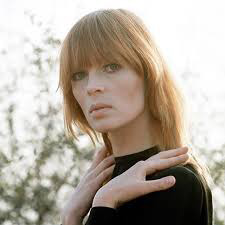 Christa on the Velvet Throne

Better know as the enigmatic, yet always smilling Nico, from the Warholian creation known as The Velvet Underground. Christa invents the Rock Chick. Like many Wharholian women, she was discarded. But she kept–and keeps fighting for music. If you haven’t seen the movie about her life you should. Self-portrait was edited to remove acne scars.

I chose a look from the mid 60s, when she was at her most iconic image of herself as “Nico”. With the use of an airbrush, it was really easy to change the skin tone to something that looked sixties-sunkissed. Her actual eye makeup was softer, but I wanted to reproduce that darkness that loomed over her eyes, by how she kept her fringe long. Not to mention the insane amount of mascare she loaded up on her lashes (which I have none). By examining a lot of black & white pictures, one could think her eye color was brown. But with all that mascara (creating a smoky effect), which had the effect of darkening her eye colour (her eyes were pale blue). For the clothing in this character design, I chose late 60s, where she was wearing suits. The Makeup is more Christa from the 70s and 80s while the actual shape is reminiscent of the mid-60s obessions with Egyptian eye makeup. I held back on the lashes deliberately, to make it more modern and keep it Rock Chick looking (on me).