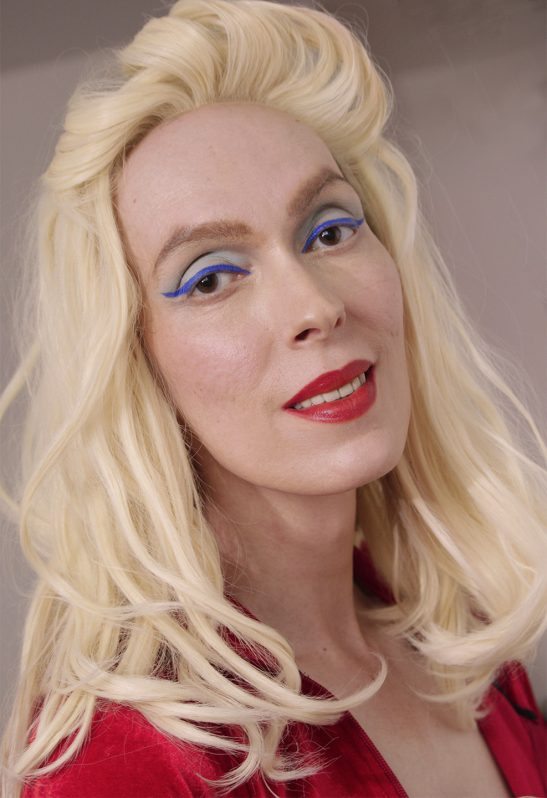 Proud to Be a Barbie

It’s June and it’s the month to be proud. When you spend a good chunk of your week dressing up, you owe a shout out to Barbie. My face was not edited in this image.

How can one not love Barbie? How can one not hate her? How many dolls have their own mythology created for them. Millions of children inventing a life for Barbs. From a fashion doll, to American beauty standard, the leap is small it seems. But Barbie manages it. As a child you can’t escape her… and being a child of the 80s, meant that I didn’t have any dialogue around her. But her outfits were fabulous!

This look is a tribute to some of the first vintage Barbie dolls of the late 1950s. If you are a Barbie enthusiast you’ll know this is when Glamour Girls or Cover Girls of Hollywood become the rage with their platinum hair. Platinum was also the colour of Jean Harlow’ hair, but here it’s seen as “good girl hair”. Actresses like Doris Day and Marylin Monroe were “models” for the early Barbie’s who didn’t yet know they would become clothes horses. And there is also a big dollop of 1950’s supermodel Dovima.

EYES
I primed the eyes with Laura Mercier Eye Basics in Linen. I used Shroud Cosmetics baby blue pastel shade, in cold shoulder, they have a whole array of amazing pastels. For the liner I used Sephora Collection 12h liner pen in 29 My Boyfriend’s Jeans.

LIPS
For that heart shaped pout, I used classic MAC Ruby Woo, with a touch of orange cream color at the center. I added a layer of Gucci Lunaison shimmer lipstick in Madge Red, a ruby tone. When I’m doing a red lip, I like to avoid using lip liner. To me, it looks very 90s! Lip pencils were invented in the late seventies, and before that, all red lips were painted on with brushes! I once got a chance to meet Dani Sandz, the woman behind Make Up For Ever, and she said the loveliest thing…. you’re a painter when you put on your lipstick… remember that!

EYEBROWS
I glued down and changed the shape of my brows. I used my trusty NYX Lift & Snatch to draw on the brows and MAC eyebrow Duo in Redhead. I also used eyeshadows to deepen the tails of the brows, a black and a ruddy brown shade, which I applied to all the areas where there weren’t any actual brow hairs.