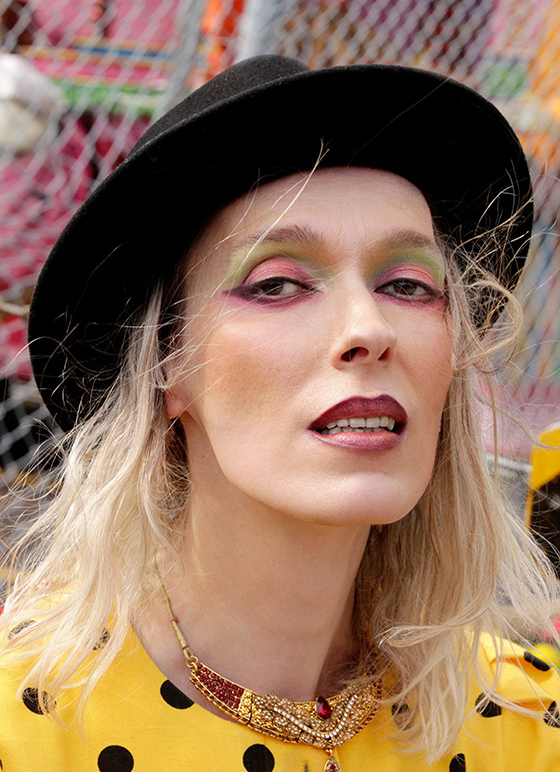 Bollywood meets the alternative 80s… New wave makeup by way of Holi Celebrations and evenings at the temple courtesy of my neighborhood; Parc X. Image was edited to improve skin texture.

I live in a part of town where Hindustani women walk around in brightly coloured sari’s. On a casual stroll, I’ll cross paths with Sikhs in wonderfully bright turbans, wearing jogging pants and T-shirts. At the local Ghana Market, an African specialty food store, I might cross a batik print. Compared to the rest of the city, attired in Post-Normcore drab garb, Parc Extension (or Parc X, to the locals) is living life in technicolor. Yes, it’s one of these “melting pots” that you now only see in a 1980s New York movie. I personally love all the culture meld that I’m surrounded by, and I always find myself inspired by the bold colour combinations. It comes as no surprise that I’m a big fan of the art direction and makeup of Bollywood movies, especially vintage ones. It was only kismet that my brain combined these two visual obsession! Somehow it’s easier to imagine what would have happened if Bollywood met the alternative 80s. You can find my little reel on my Instagram.

If you want to know more about New Romantics/New Wave/ Blitz Kids, I would suggest to look up MY PREVIOUS POST. This 80s aesthetic was born out of clubbing nights in England. Partly thanks to the Blitz Kids (named after the club they were frequenting). Some might call them creatures of the night (and day), but they were just very bored twenty-somethings looking to emulate their heroes (fellow English rockers Bowie and Bolan). They took it one step–wait– more like a mile further. Going beyond merely revisiting vintage looks, which was the trend of the late seventies, they were the first to do mashups of makeup styles. Quoting German expressionist cinema (think: Nosferatu eyes and hollow cheeks), with Hollywood glamour (pencil thin eyebrows and cupid’s bow mouths à la Clara Bow). Thrown in for extra measure you had Pierrots, geishas, Chinese opera, nuns, a touch of punk here … and of course pure Bowie-outlandishness. They painted quite the tableau, I have to say! I’m a big fan of painterly effects and costumes. Within New Wave itself is the desire to make daring combinations like “Bollywood meets the alternative 80s”… And following in the tradition of the magpie makeup mashup here is a version of 80s glamour extravaganza !

EYESHADOW
To get all my colours to pop I used NYX Jumbo pencil in ‘Milk‘ as an eyeshadow base: it’s cheap an cheerful! I started by applying the matte shades. First is the bright yellow with a hint of green by Ace Beauté ‘Mango’ (it’s from their green palette ‘Tropical Vibes‘) this went right under the brow. In the crease I used a bright lime shade ‘Body Snatched’ by Lethal Cosmetics. All over the lid I used the baby pink coral ‘BMP’ Gel Liner by Lethal Cosmetics as an eyeshadow. To create shading on the inner and outer lids, I like to use a darkened burgundy/brown plum shade instead of black: in this case it was ‘Rouge Noir’ by Chanel. Taking care to keep the center colour intact. To add dimension to the crease, I used a blue grey shade, this also created a bluer tone in the green.

Lower lash line: I used Colour Pop’s ‘Sandbar’, a dense fuchsia shade. Here, again, I used the Chanel ‘Rouge Noir’ to darken the outer edges on the lower lash-line to create the liner shape. I then used the Coastal Scents ‘Dark Mango’ as a transition shade between the blush and eyes. I finished the look by using a black cake liner to line all around, and a black eye shadow to soften the edges. All the shimmer/blitz/duo chrome shades are by Pat McGrath Labs from various palettes. But due to the very soft cloudy sky, the shimmer had no light to catch!

BLUSH
I custom mixed a caramel/camel colour that I like to use for different purposes, it’s a great transition colour. Here, I used this custom shade all over on the cheeks. I then applied the Make Up For Ever Orange Flash Colour on the apple of the cheek. I blended out the edges by using the pastel tangerine blush by Nars.

LIPS
Under the shimmer I used a custom blended coral shade similar to the ‘Dark Mango’ eyeshadow in the colour chart above, and the lips were lined with MAC ‘Chestnut’ lip pencil. I used a mix of different shimmer lipsticks to create the different tones, namely two shimmer liquid lipsticks from the MELT Beetlejuice collection. But you don’t have to! Just use any bronze, pink, purples or… you can also use any shimmer/metallic shadows in your collection, and press them onto your lipstick. This is a fun thing I like to do: experimenting and seeing how the different colours blend together.